Read this, Read that, Redis.

Noze.io is starting to get persistent. Publish “Hi!” to Redis.

Starting with Noze.io 0.3 a Redis client is included. Redis is a very fast, scalable and easy to use key-value store. One common usecase is to store connect sessions in Redis, but it can be used for all kinds of applications. Checkout the Redis website to learn more about it.

The Noze.io implementation is a clean-room, Noze.io specific Redis implementation. As usual it is fully asynchronous, non-blocking and ßatch based.

So how does that look in Noze.io? We took inspiration by the node-redis module and modeled the Noze.io version after that. The result looks almost exactly the same, except that you get an AOT compiled, statically type-checked binary. It is also a great demo on how static typing rarely helps to avoid real-world bugs 🤓

OK, lets jump in - Connect to Redis, store a key and retrieve it afterwards:

Note redis.print. This is a function which can be used as a callback for debugging/testing purposes. It just logs the err/reply coming back.

Redis can store simple key/value pairs, but it can also store more complex stuff as lists, sets or hashes. A demo for the latter (essentially [String:String] dictionaries) is contained in our todo-mvc-redis.

Another feature Redis provides alongside KVS is a Pub/Sub broker. Think “Slack” or “IRC”. Your client subscribes to some channels and gets notified when messages get published on those channels. Sample:

You get the idea.

To give a more complete example we added todo-mvc-redis. It is a sample Todo-Backend which persists the todos as Redis hashes and uses Redis INCR to maintain a primary key sequence. 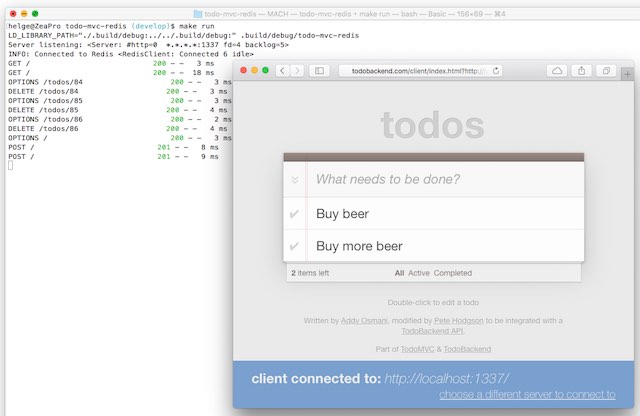 Check it out! It actually works :-)

However: We didn’t yet get a libdispatch version running against Swift 3pr2 on an own Linux instance. So you may need to stick to Swift 3 Preview 1 on Linux if you really want to use Swift 3 already.

Our recommendation is still the same: Stay with Swift 2.2/2.3 until Swift 3 - particularily Swift 3 libdispatch on Linux - is sufficiently stable.

Well, as usual, head over to GitHub and checkout the master branch or fetch the 0.3.0 tag. Happz noziredizing!